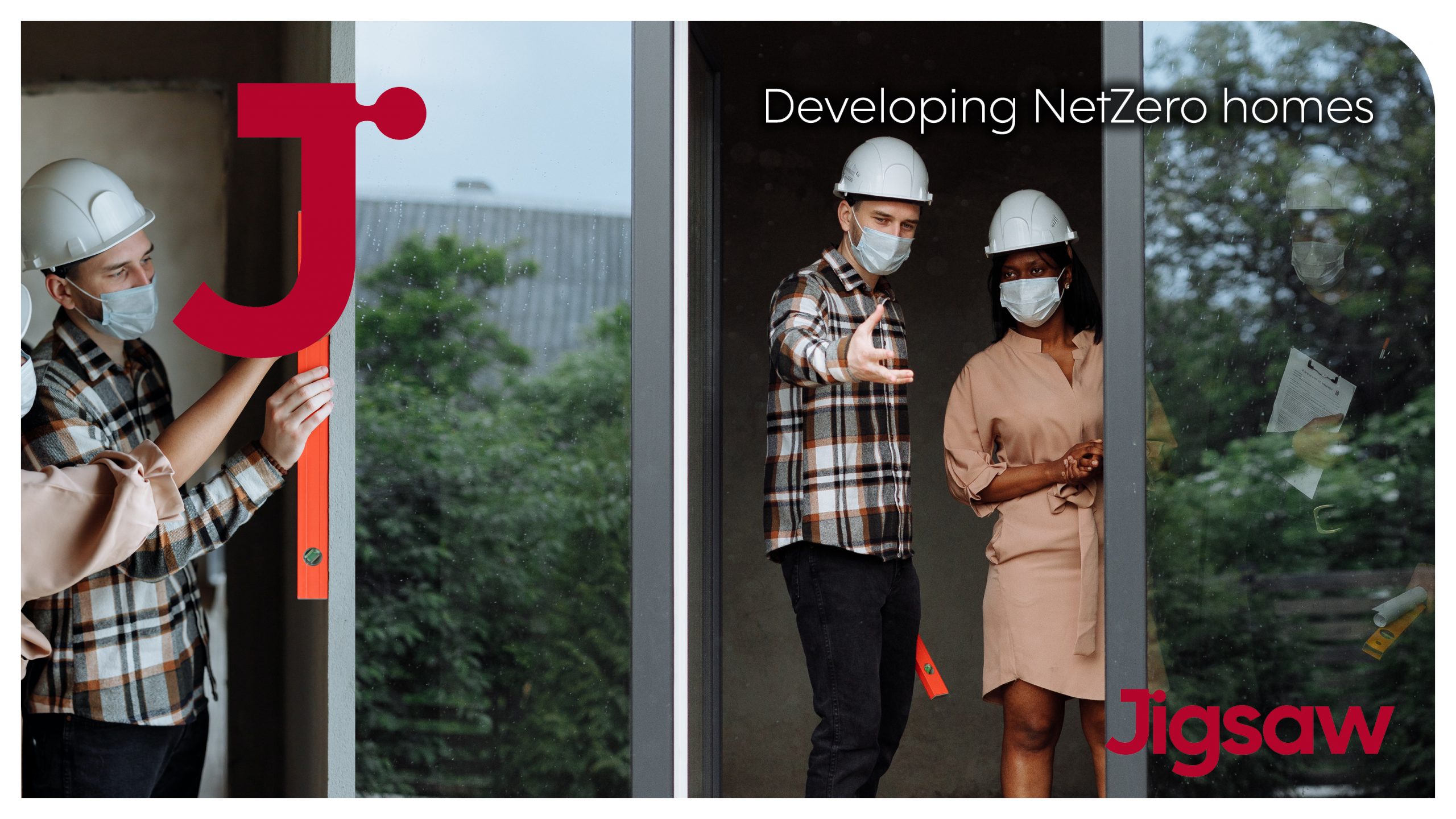 The homes on this site are being built with the environment as its focus. The site will be completely electric. Solar panels are being installed wherever they can. The water cylinders will recycle energy from the warmth in the air from the rooms around them. “We want to be ahead of the curve. We want a decarbonised home today,” said David.

But, what about the heating system. Again, this will be electric. But, unfortunately due to the longstanding delays on SAP 10.2 it will not be Jigsaw’s Infrared Heaters. The SAP figures are what is used to calculate a properties efficiency. Each product is measured against this.

David noted, “We worked hard to ensure that the properties are being built to the highest standards of energy efficiency. Every product has to be measured to reach an overall energy efficiency figure. Due to the old SAP figures IR cannot currently be used at this development.” The disappointing fact of the matter is that the potential saving made by Infrared Heating and our control system over the electric heaters being installed would easily be 20-30%.

Unlike the convection system being installed, IR does not heat the air first. IR heats the objects in the rooms and the people using them. This sounds like science fiction, in reality it is what we experience from the sun. In a room setting we are heating the square shape of the room and not the cubic volume before we feel warm. The room can be cool and you would still feel warm from the Infrared panel heater.

The real benefit that makes the Infrared Heating system ‘sing’ is the ability of the room to be monitored for motion as well as air temperature. Simple put, if there is no one in the room and no motion, why heat it? The room sensor can measure heat and motion. The system can be set to a fall back temperature of 15º/16º and then be boosted to 19º/20º when there is someone present in the room. On initial installations this has shown savings of 20% on the heating bills in a domestic environment.

Further benefits of the IR panels over convection are:

What Should the Government Be Doing NOW???

When the Government announced that it would be launching one of the worlds most ambitious targets to reach Net Zero by 2050 did it really know how this would be achieved? It has unfortunately let developers like David of Sky-Houses down. New home builders can be making a positive change in the pursuit of Net Zero now. If they were allowed to really innovate.

The Government are currently relying on SAP figures that are a number of years out of date. These figures currently show gas as being more carbon efficient than electric even though the UK electric grid is constantly being decarbonised by additions made by wind, solar and biomass. We are supposed to be decarbonising and moving away from gas, but developers are being punished if they install electric heating. Even though, and in Sky-Houses case, also adding solar panels to the properties. This is especially worrying when in 2025 gas will be banned from new home developments. Developers need the time now to test a range of products before engaging in large scale projects.

The Government have not considered new and emerging technology. The level of investment for any company to get their products tested with the BRE to get a Q appendix code is extortionate. The current documentation pushes ASHP’s heavily without any consideration for the building that they will be installed in. Or, the potential of better alternatives being available.

Sky-Houses never considered Air Source Heat Pumps (ASHP) for the installation. The reasons for this being that the installation would be much more difficult as it requires a wet system of radiators. David also said that “they (ASHP) are noisy. We have two units at our own home. We are surprised that the neighbours have not complained. Plus, they take up a large amount of space which wouldn’t fit our development.”

It was a pleasure to talk with David and to get an understanding of the investigations carried out before the building has even begun. Let’s hope that we can help him on the next development.