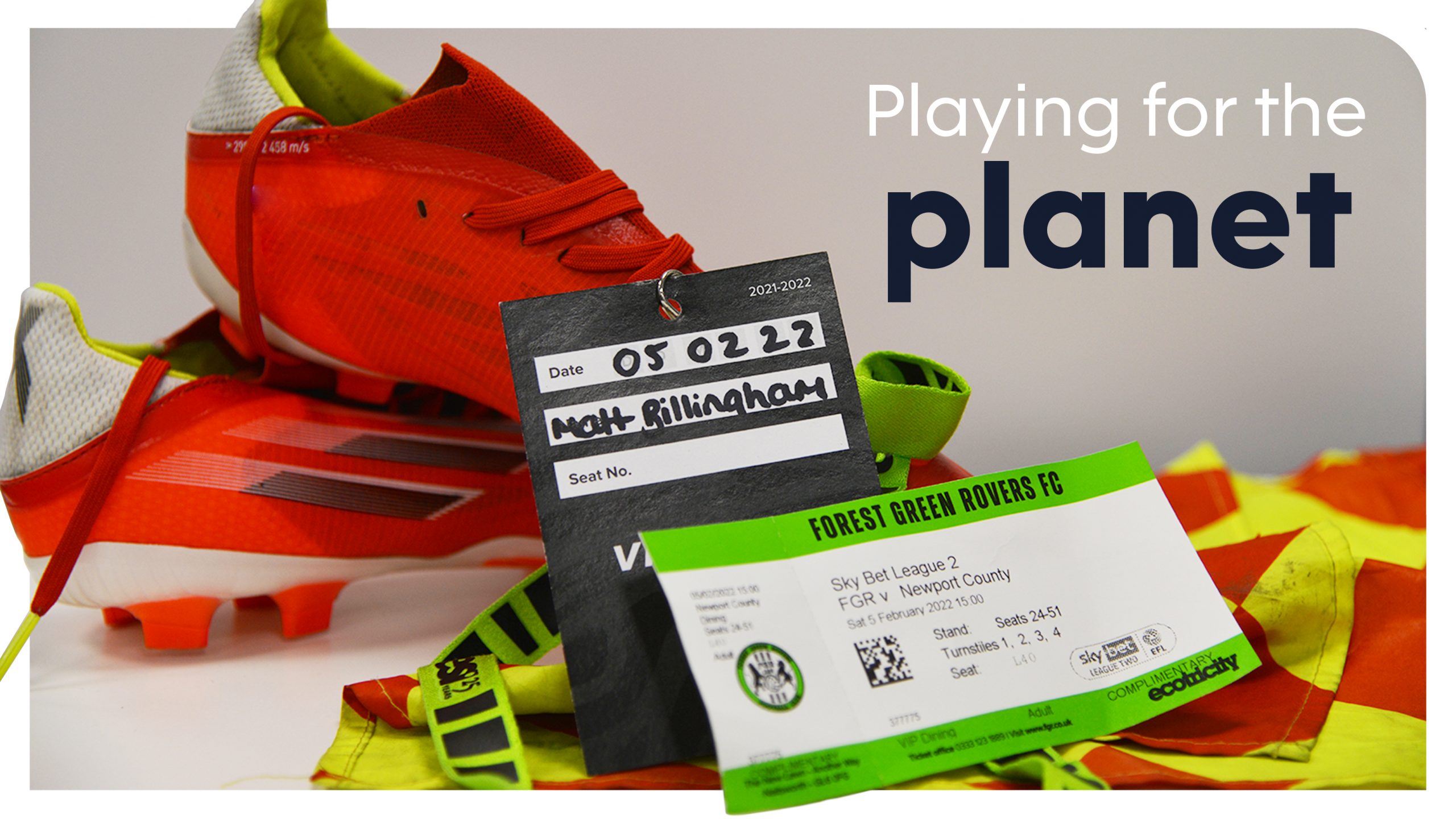 At Jigsaw as a sustainable company our goal is to represent positive climate action. Selling our low carbon products has a large impact on reducing climate change. However, to half global emissions by 2030 we need to do more for our planet. Supporting other ways to help decrease carbon footprint is a large passion for our company. Climate change doesn’t pause and neither do we.

At the weekend our CEO Glenn Billington and Managing Director Matt Billington watched the match of the world’s first carbon-neutral football club. Forest Green rovers against Newport County. They are not only great game players, winning against Newport County by 2-0. Forest Green believe in doing things differently. They represent another inspiring sustainable milestone for football. Bringing ‘net zero’ into the football community encourages fans to make better sustainable choices. Which is why Matt and Glenn Billington are looking forward to sponsor them and form a bigger change for the fans and team.

Our CEO Glenn Billington says “The efforts that they have gone through to contribute to the environment are amazing. More interesting is the contribution that Jigsaw can make to improve it even further “

Through sport they have the power to change lives.

Playing for the planet

Described by FIFA as the “greenest football club in the world”, the team’s sustainability on the pitch has made them the first football club in the world to gain EMAS accreditation (Environment Management Accreditation Scheme). Meaning that all their hard work supporting and protecting the environment has given them the gold standard in environmental management. The teams’ initiative to have a ‘greener stadium’ doesn’t just include recycling or introducing vegan food options. The core environment impact of their football club lies in the construction and maintenance of its stadium. By doing this they have reduced their carbon footprint by 53% compared to last season. Which I have to say is mind blowing to think that the entire stadium is powered by 100% green energy and some households have not even started recycling yet. We can all take steps to help protect the planet for future generations, including in major sporting events.

As an electric infrared heating company ourselves we are impressed with how the stadium has converted to electric. The shift to low carbon, sustainable alternatives is increasing.  The stadium switched to a carbon neutral gas tariff which has drastically reduced their energy emissions. They have seen reduction in the amount of electric that they use drop by 18% and gas by 70%. That is outstanding for a such a large stadium. The good news is that Jigsaw want to help reduce their energy emissions even further with our infrared heating.

Furthermore, fans visit the stadium in Gloucestershire from all over the country. Obviously, the team can’t reduce the number of emissions the fans produce from transport. However, they encourage the use of electric cars. They have Electric car charging bays smartly sourced by the wind and the sun, with a combined of AC and DC points. Able to charge up to 5 cars at the same time.

Equally important, they use multiple solar systems. The use of solar panels is increasingly popular amongst other football clubs. Forest Green Rovers use ground based solar system generating green electricity just from the sun, which they use to power their stadium. Along with a solar system on the roof. When the sun is out the 170 panels put out 45kW of green electricity. Installing solar panels on such a large stadium helps combat greenhouse gas emissions and reduces fossil fuels.

Green sourced equipment. All their equipment is powered by electric including a robotic mower, leaf blower, and an electric strimmer. Not forgetting their biofuel ran tractor. Using biofuel is nontoxic and biodegradable. Compared with fossil fuels, biofuels consumed in the UK achieve 61% carbon savings.

Extra for the environment

Not just an ordinary bright football kit. They are made from bamboo from the company player layer. Yes, they are made from the world’s most renewable material. absorbing five times more carbon dioxide and 35% more oxygen than similar plants. The insulation is great alongside the unexpected British weather keeping them cooler in summer and warmer in winter.

As well as, a fantastic vegan menu. No greasy unhealthy football stadium food here. As soon as you enter the pitch it is vegan all around. Furthermore, they change the menu each match-day weekend, based on locally sourced ingredients. It could be from vegan pies, burgers, pasties and even fish and chips. Made from Quorn, tofu, and local vegetables. “Our food is legendary” they claim on their website. Matt and Glenn would have to agree, after trying the vegan tofu fish and chips. They even reuse their cooking oil to use as biofuel.

Moreover, greenery and biodiversity projects are being introduced at new and existing stadiums. FGR go the extra mile. By Designing the world’s first timber stadium. Components, which would normally be steel or concrete, will be timber instead. Making this swap to the lowest carbon material on the market means that the stadium will also consume carbon, just like trees do. Helping maintain oxygen levels.

Organic pitch. Harvesting all the water that goes into their pitch, using underground drainage stored in a holding tank to be reused again. Not only this but they are in hopes to go mains free in the future. Using zero chemical pesticides or fertilities. Preventing pollution in the water systems improving water quality.

Furthermore, they create habitats for wildlife. Planting wildflowers to native trees including Hazel, Ash, Hawthorn, and Blackthorn. Moreover, by protecting healthy ecosystems, it helps clean our water, purify air, maintain soil, and regulate the climate so it can provide us with nutrients for food.

The team are still expanding their net zero stadium planning to move to a much a much more sustainable location and Jigsaw have many plans to expand this with them.